Traveling to Macedonia, Photos, Reviews, Tips, Macedonian History, Videos & Photos, Downloads, and anything and everything Macedonian!

Skopje - The Capital of Macedonia & "The City that Never Sleeps"

Skopje is the Capital City of Macedonia, and also the largest and most important city. The Skopje metropolitan area is home to approximately 700,000 people, making it 7 times larger than the second largest city in the country. It is located in a valley in the Central-Northern part of Macedonia, at an elevation of 240 meters.

Skopje has been constantly inhabited for over 6,000 years. Early Neolithic settlements have been uncovered recently in the "Kale Fortress" that overlooks the city center. The area has been under various rule over time, including Macedonian, Roman, Byzantine, Ottoman, etc.

After the first world war, Skopje was conquered by the Kingdom of Serbs, Croats, and Slovenes. It remained in their control until the second world war, in which the bulgarian military (a nazi ally) moved in to take control of the city and continue the devastation started by the nazis in other parts of Europe. After the end of WWII, Skopje and Macedonia became part of a new Communist nation - Yugoslavia.

During that time, Skopje began a transformation into a heavily industrialized city. It's then that Skopje truly began to grow into a large and important city in the South of Yugoslavia. Skopje was home to many large industries, including large Steel and Iron Manufacturing, Petroleum Refining, Leather & Textiles, Construction, and more. In 1963, Skopje suffered a devastating earthquake that destroyed roughly 80% of the entire city. Skopje remained a part of Yugoslavia for 50 years until Macedonia gained independence in 1991. It was the only nation to gain it's freedom peacefully from Yugoslavia.

Since Macedonia's independence in 1991, Skopje has been changing rapidly. The city has been growing

faster than any other city in the region, with more construction, new settlers, and an ever-changing face of the city.

Many new hotels, businesses, shopping malls, factories, apartment blocks, and other investments have filled the real estate in the city, offering more for tourists and residents alike. Hundreds of Cafes and Restaurants await the hungry travelers with a traditional Macedonian meal, or an Italian, a Mexican, a Chinese one, or whatever your choice is.  Skopje is a busy place that will keep visitors busy and enchanted with it's lights and sounds. 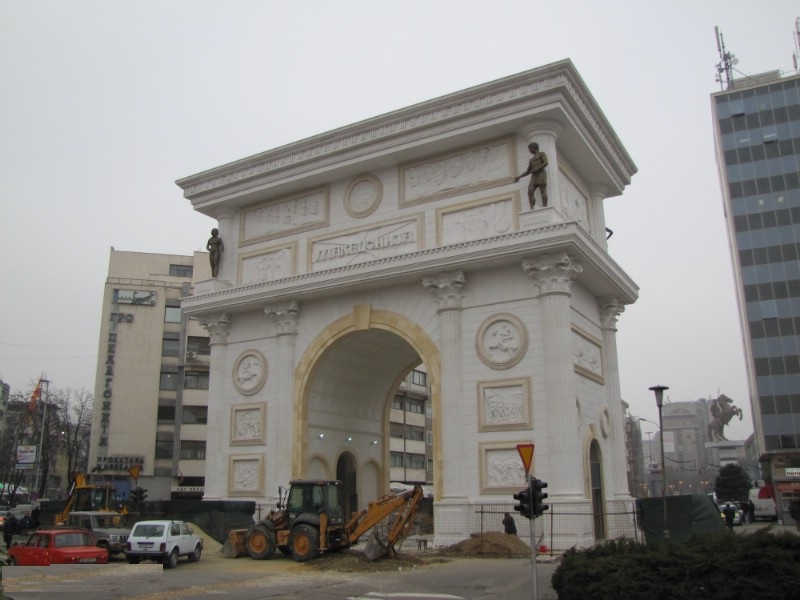 the image of Skopje and bringing back the old flare that it is known for.  The project includes new museums, new government buildings, dozens of statues from Macedonia's rich history, new bridges, boulevards, parks, a new National Theater & Opera House, and more amenities that will attract a growing number of tourists to the city.

One walk into Skopje's famous "Macedonia Square" and the evidence is obvious: a 24-Meter tall statue of Macedonia's most famous man - Alexander the Great, right in the middle. In the immediate vicinity are statues of other famous Macedonian revolutionary fighters, King Samuel, the Macedonian Emperor Justinian of the Byzantine Empire, the new Museum of the Macedonian Struggle for Independence, the new Constitutional Court, the Agency for Electronic Communications, the Holocaust Museum, and much more. The entire project aims to promote the "baroque style" of architecture that was present in Skopje before the 1963 earthquake.

From the main square, the World's Largest Christian Cross is visible atop Vodno Mountain. The "Millenium

Cross" as it's named, proudly stands 66 meters tall at the top of a 1,100 meter mountain. The Cross was built to commemorate 2,000 years of Christianity in Macedonia and the world. Recently, the government built a ski-lift that operates year-round, and allows tourists to reach the cross without having to hike up the mountain. Once at the top, a marvelous view of Skopje can be seen. There is a mountain climber's station that offers beverages, and a restaurant/cafe is being built at the base of the cross, along with a souvenir shop. The cross itself has an operational elevator and stairs, where visitors can climb to the top and get an even better view of the city and the entire region.